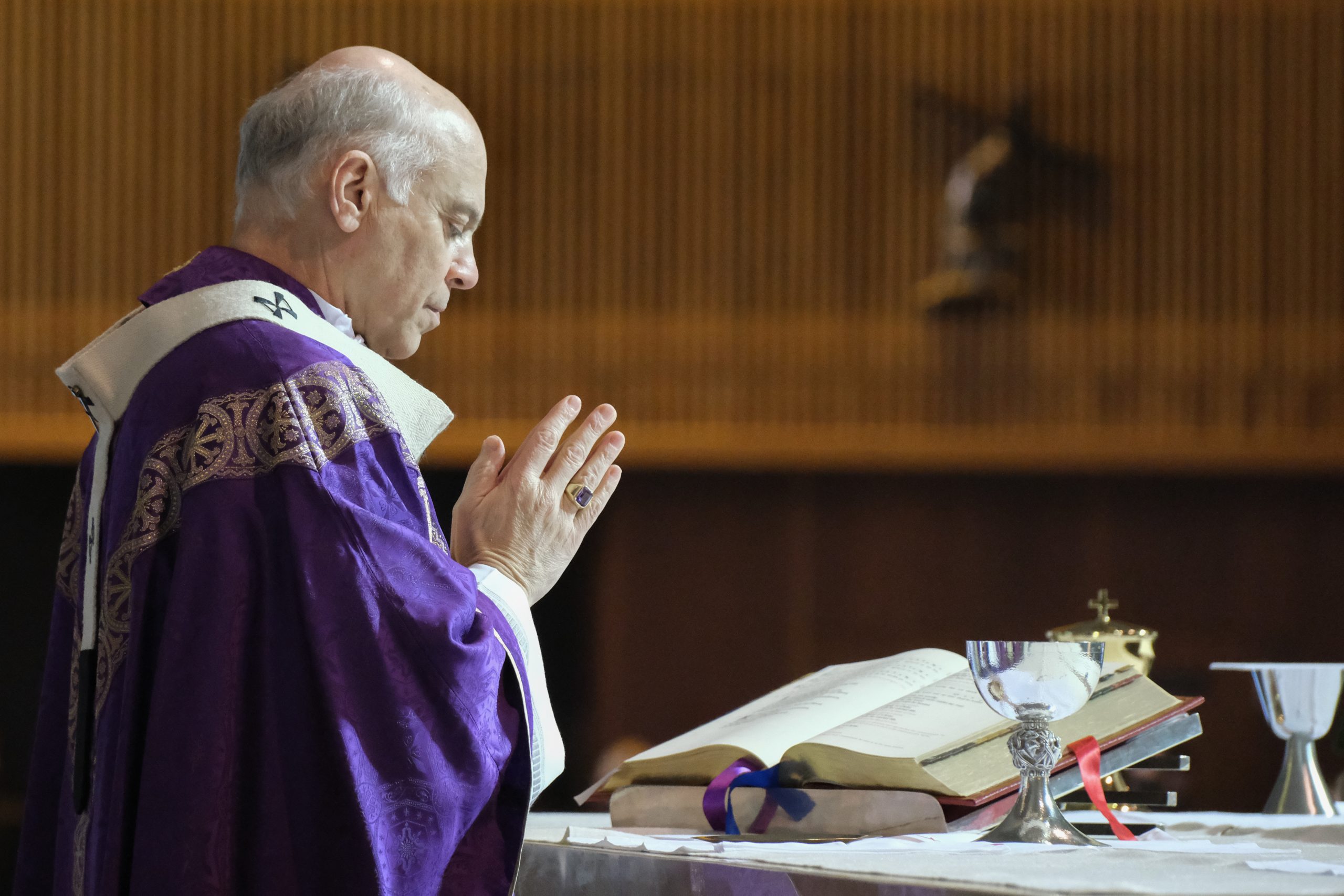 An open letter to students of Riordan High School

Archbishop Riordan High School held an all-school assembly earlier this school year featuring pro-life activist Megan Almon. During the assembly, a number of students walked out in protest of the event. Archbishop Cordileone went to Riordan High School to meet with student leaders in small groups on November 8. What follows is the letter he sent to all students in preparation for these meetings.

Every stage of life has its blessings and challenges, its gifts to offer the broader society and its blind spots. As young people, you are idealistic, full of energy to be advocates for justice and changing the world into a better place. It is a joy for me as your Archbishop to see this energetic idealism in you when I visit your school.

This is a great blessing, and it is the gift that you offer to the rest of us. However, you still have much growing and learning to do; much success and failure, joy and suffering lie ahead for you – and learning as well. To be learned is to seek truth that is given to us by God. My prayer as your Archbishop is that you will be open to learning and growing in your knowledge, and especially open to hearing and trying to understand points of view different from your own, even points of view with which you strongly disagree. I wish that is what those of you who walked out of the speech by a pro-life activist recently would have done. This action put on full display one of the blind spots of youth due to young people’s lack of extended life experience: gullibility. Let me explain.

While every generation has valued science and contributed to its advancement, your generation, more than any other in the past, looks to science as a guide for navigating oneself through life. Let’s, then, look at what science has to say about abortion.

Abortion is the killing of a human life. This is a scientific fact. The fetus in the mother’s womb is a unique, growing human being, with its own unique DNA. The method of killing depends on the stage of pregnancy and type of abortion, but often involves such techniques as dismembering the limbs, crushing the skull, and burning the body. No matter the method, abortion is a horrendously violent act. This is not hyperbole. It is scientific fact.

Science is a very important guide for us, but it is not the only one – nor the most important, for that matter, since the knowledge we acquire from science is always evolving. Abortion, just as any other major social issue, has many other dimensions to it: political, societal, emotional, spiritual, relational, economic, and so forth. Primarily, though, it is, like any other major social issue, a moral issue.

To the young women I say: your fertility is a blessing to be cherished, not a problem to be “fixed” or an appliance with an on-and-off switch to be flipped at will. God has given you the awesome gift of being able to conceive and bring to the light of day a new, unique human being, with an immortal soul. I’m old enough to remember a time when our society cherished this gift and protected it; indeed, in effect, society organized itself around it. It is true that back then women were deprived of many opportunities that they now enjoy, and this is progress to be celebrated. However, it should not come at the cost of women having to cancel out this awesome gift.

To the young men I say: there used to be a time when, if a man did something that caused inconvenience in his life, he would be a real man and take responsibility for it. It was also much more common for a man to respect a woman as his equal, and not use her for his own selfish pleasure. He would not engage in an act by which he might become a father unless he was ready to take responsibility for that: a life-long commitment of fidelity to the woman with whom he fathers his children, and of caring for the children they together bring into the world. You still have a ways to go before you mature into full manhood. If you want to remain a boy forever, then spend your life caring only about yourself and every little immediate pleasure that you desire, because to be a real man requires a life of sacrifice and virtue. It also means acting responsibly by showing respect toward women as your true equals and cherishing and respecting that awesome gift she has of bringing new life into the world.

To all of you I say: do not be victims of the culture. There are powerful forces in our country that use slogans to coopt you into being agents of their own self-serving agendas. You must see through the lies. Abortion “providers” are not for choice: every birth for them is a lost sale. If they were for choice, why are they not providing opportunities for women in crisis pregnancies the means to make a choice for life? They also say that they are for women, but where are they when women who are dealing with the pain of the abortion experience need healing? Why are women in this situation not even allowed to talk about it, but must hold the pain inside, sinking deeper and deeper into their grief and depression? Who does she turn to when she finally has the courage to seek healing?

She turns to the Church. It is only people of faith who provide her this opportunity – and almost always our fellow Catholics. I could not be prouder of them. You have not heard this because there is a culture of silence around it, but those of us in pastoral ministry have all too often heard the lament from post-abortive women: “I didn’t want to go through with it, but I felt like I had no choice.” This removes the mask from the lie of “pro-choice.” It is also why abortion “providers” will lie to a woman about what is going on inside of her body, telling her it is only a clump of cells and not a growing, unique baby in her womb. If you doubt that that’s the case, look at some 3-D sonograms.

Who are the ones who are really for choice? Once again, it is people of faith. It is people of faith who run crisis pregnancy clinics that give women the support they need to bring their child to birth, and continue to accompany them after birth: free health care; diapers, blankets, formula; making available psychological and spiritual counselling; walking her through the adoption process, if that is her choice; helping her obtain a job, if that is her choice. It is people of faith who understand that the answer to a woman in a crisis pregnancy is not the violence of abortion but love for both mother and child. And once again, I could not be prouder of my fellow believers who provide and support these loving, life-giving services that give real hope to women who are feeling alone and abandoned.

Those of us who are getting closer to the final stages of life also have our own gifts to offer and blind spots. We can become cynical and apathetic after experiences of betrayal, deception and failure. But we also have much life experience from which you can learn. My earnest hope is that you will cultivate your idealistic energy for justice, while learning to see through so many lies of the culture in which we are living. Do not fool yourselves, though: advocating for justice in an unjust society is not glamorous. Indeed, it will make you social outcasts, not  welcomed in the circles of polite society, much less of the socially elite. You will be scorned, mocked and ridiculed. You will have to develop very thick skin. Is it worth it?

Think of the abolitionists of the mid-19th century, or the advocates of civil rights of the mid20th century: they did not fit into the societies of their times, advocating for politically unpopular and unfashionable causes. They risked, and some lost, their lives in the effort to correct the greatest injustice of their time. We now regard them as the moral heroes of their generation. The most renown of them all, Rev. Dr. Martin Luther King, Jr., once said that “the arc of the moral universe is long, but it bends toward justice.” This, though, only happens when a new generation of moral heroes rises up to correct the injustice. This requires a strong backbone, great spiritual stamina. Will you be the moral heroes of your generation? Do you have what it takes?

You will if, above all, you cultivate your life in Jesus Christ. He loves you. He gave his life for you. He is the one Savior of the world, who teaches us saving truth. Pray, stay active in your faith and grow in your faith. If you do all this, you will acquire wisdom, fortitude, courage and patience, and so be capable of truly advancing the cause of human flourishing. The future is in your hands.

Let me leave you with the words of celebrated leadership expert and internationally acclaimed bestselling author Robin Sharma: “You can fit in. Or you can change the world. You don’t get to do both.” If you choose the latter, the future will be bright.

Sincerely yours in Christ,