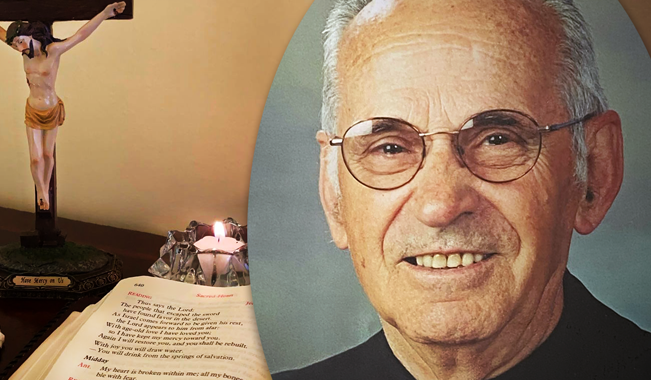 Rev. Fr. Aloysius J. Pestun, SDB, Parochial Vicar at Corpus Christi Church then later in residence at the same parish, died after a brief illness at San Francisco General Hospital, at 4:01 PM, Friday, July 22, 2022.  “Fr. Al’ as he was known, was appointed to Corpus Christi Church in May of 1996. At the parish he is remembered with affection for his dedication and determined service.  Despite his advanced age, his memory by name of people he ministered to at Baptisms, Weddings, Funerals and home visits remained fixed in his mind. Some parishioners speak of him as “the priest who could not stop working.”

At the time of his death at the hospital, he was surrounded by his niece Helen, nephew Edward, and his entire Salesian Community (Fr. Tom Thodukulam, Fr. Edward Liptak, Fr. Tom Juarez, Fr. Peter Le, his friend Alejandro Alvarez, and Tristan Barnett).

Among his brother Salesians, he used to enjoy recalling his years of studies for priesthood at Aptos (near Santa Cruz, California).  He also spoke often of his assignments after priestly ordination, as librarian at St. John Bosco High School (Bellflower) and at Salesian High School (Richmond).  His vivid memory would not allow him to forget the many students and laity among whom he worked.  As associate pastor and a popular confessor, he spent a short time at Ss. Peter and Paul Church (San Francisco) and for the remaining 26 years of his life, continued to be of service at Corpus Christi Church in San Francisco.

Fr. Al’s loving-kindness towards everyone and his faithfulness towards his priestly duties, will continue to be a lasting example of what it means to love God and neighbor until the last breath.  Fr. Al will be greatly missed.  May he rest in peace.

Read about Fr. Pestun’s escape from communism with the help of Blessed Titus Zeman.