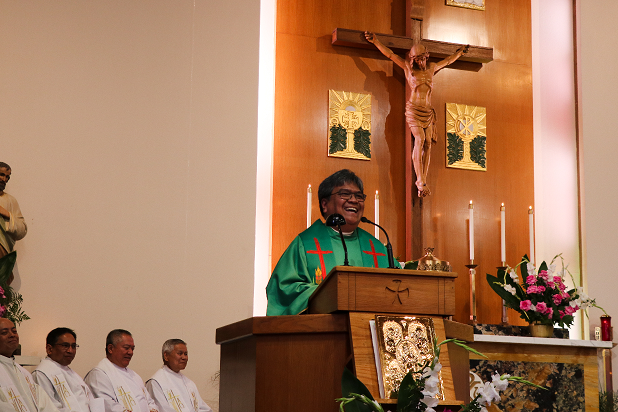 Father Roland De La Rosa was installed as the pastor of St. Bruno Catholic Church in San Bruno on Sunday, Oct. 9. Archbishop Salvatore J. Cordileone celebrated the Mass, which was followed by a vibrant celebration.

“This day then is marked in both senses, with gratitude and hope,” noted Archbishop Cordileone in his homily. “Gratitude for what has been accomplished here and looking forward with hope for future challenges and opportunities that with the grace of God will be met.”

The Mass included a special rite of installation, which includes the new pastor being presented to the leadership of the parish, including the parish council and staff. The new pastor makes an oath of fidelity to the teachings of the Church and leads his new parish in the Creed and makes an additional oath to his parishioners and the Archbishop. The parish choirs also participated in the Mass, including the Fijian children’s choir who sung a joyful rendition of Immaculate Mary during Communion.

At the end of Mass, Father De La Rosa expressed his gratitude for the many people who had come to help him celebrate his installation, including fellow priests, and parishioners from both St. Bruno and Mater Dolorosa Catholic Church, where he was formerly pastor. He also thanked  Archbishop Cordileone for celebrating the Mass of Installation and the Vice Mayor of South San Francisco, Buenaflor Nicolas, who was also in attendance.

Following Mass, a reception was held during the annual parish festival, showcasing the diverse community at the parish and celebrating the new pastor.