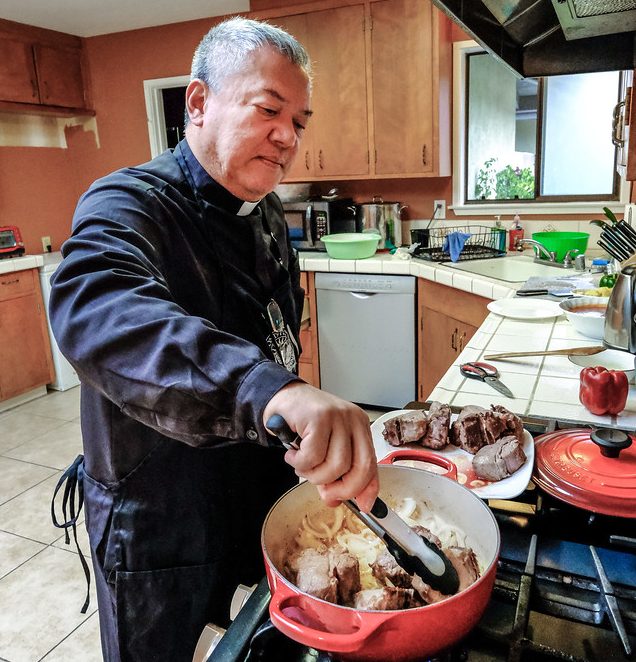 You don’t have to be especially fare-minded to notice that the story of human salvation more or less begins and ends with a meal. From the forbidden bite of an apple in the Garden of Eden, to the central role of bread and wine at the Last Supper, Christianity and food have an intrinsic link.

No one seemed to appreciate the power of a shared meal more than Jesus. In the Gospels, it’s where he often revealed his divinity. He filled empty wine jugs at the wedding at Cana and turned a paltry supply of loaves and fishes at the Sermon on the Mount into a bounty. It was at a meal that he brought his followers together on the night before his death and invoked them to continue to share the same meal after he was gone.

Here, three local priests and a brother known for their cooking describe their avocation and its pastoral parallels.

Father Angel Quitalig had little interest in cooking until he became parochial vicar of Holy Name of Jesus Parish in San Francisco after his ordination in 1998.

“When I was growing up, I didn’t cook for myself, and when I was at the seminary, someone cooked for me then too,” said Father Quitalig, pastor of St. Mark Parish in Belmont.

The now-retired pastor of Holy Name of Jesus Parish, Father Donald D’Angelo, encouraged the young priest to learn to cook after noticing his interest in the goings-on of the rectory kitchen.

Father D’Angelo taught Father Quitalig to make pastas and other simple meals, with an important maxim: always use the best ingredients you can.

“One reason I love cooking is because I love eating,” Father Quitalig admitted. He is “not shy,” he said, about asking a chef or home cook to reveal ingredients or steps in a standout dish.

As a busy pastor also on the staff of the archdiocese’s Metropolitan Tribunal, being able to cook helps satisfy his yearnings for Filipino dishes, such as “adobo” (which is different than the Mexican version).

Father Quitalig puts his own twist on the traditional dish, blending the distinctive spices and flavorings into a smooth sauce to be added at serving.

“I enjoy the whole thing, every bit of the cooking process,” he said. Despite a robust appreciation for the pleasures of food, he believes, however, that the “perfect meal” is less about flavors or techniques and more about what happens when food is shared.

“The very intent of cooking is to share with people, first and foremost, the blessings and the gifts that God gave us,” he said. Pre-pandemic, he prepared breakfast for the pastoral staff each Sunday after the 8 a.m. Mass.

Father Quitalig’s culinary compadre in the St. Mark rectory kitchen is often Father Dominic Lee, who ministers to the Chinese Catholic community in San Mateo and lives at St. Mark. On Oct. 20, Father Lee and Father Quitalig teamed up to prepare a multi-course Cantonese dinner for six parishioners who bid on it in a recent fundraising event for the parish.

Father Quitalig said that though he doesn’t pray the Hail Mary or rosary when he cooks, his intention is always prayerful, especially when cooking for others.

“I want to deliver the joy I feel so that others feel blessed and will say ‘thank you’ to our Lord,” he said.

When it comes to food that makes him happy, Father Quitalig said he is not hard to please.

“Give me an egg with a hot dog or a sausage in any form, and I’m happy,” he said with a smile.

Until just recently when he was moved to St. Theresa Center in Las Vegas, which serves those living with HIV or AIDS, Dominican Brother Michael James Rivera was for a short time an internet cooking star.

This past Lent, the former director of community outreach for St. Dominic Parish’s Lima Center teamed with Kathy Folan, director of family and youth ministries, for a series of nine food and craft videos.

“Heaven’s Kitchen” was produced each week as a fun, family-oriented religious education teaching tool during the Lenten season.

In Episode 1, viewers saw Folan and Brother Michael James mixing flour and water to create a dough they would roll out, then braid into a bready crown of thorns topped with toothpicks.

In the “Heaven’s Kitchen” finale, guest chef and pastor Dominican Father Michael Hurley joined the pair in the kitchen to caramelize the top of a lemon meringue pie – a not-for-children step in the recipe.

“You have to know your lane when it comes to cooking, and mine is either barbecue or blow torches,” said Father Hurley in the video, pulling a 2-foot culinary torch out from under his robes. “Easter is full of fire,” he explains.

Brother Michael James grew up dusted in flour as part of a family who liked to bake together. He remembers his grandfather cracking walnuts for the candy his grandmother would make for the holidays.

That memory, together with “all the people who took up baking during the pandemic,” helped inspire “Heaven’s Kitchen,” he said.

He recalled his first batch of brownies with an embarrassed laugh. He figured he could use Dutch drinking cocoa as a substitute for baking cocoa. “The brownies came out completely flat.”

Spend a few hours in the kitchen with Father Pat Michaels and you will learn about fennel pollen, collected from local plants to flavor savory dishes. You will have your first taste of Italian chestnut honey, a delicate finish for an angel hair pasta fritter appetizer. You will sample his Sicilian grandmother’s hazelnut and chocolate “butter finger” cookies hot out of the oven. You will leave satisfied in every way.

It speaks to Father Michaels’ capabilities and confidence in the kitchen that the longtime pastor of Our Lady of Mount Carmel Parish agreed to field questions from a writer hours before he was to put a four-course, nine-dish Italian dinner on the table for 12 guests.

The dinner was a prize to the highest bidder in a fundraising auction for Tribe Rising, a nonprofit started by two parishioners to benefit children of the disadvantaged Santal tribe in India.

Father Michaels’ culinary gifts and knowledge are such that they have been a fundraising source for the parish for almost 10 years. One such fundraiser helped defray the cost of “deferred maintenance” for the large church.

“Last year we auctioned off four dinners for 12 people each,” he said. “Then, with COVID, no one could cash them in. This dinner is the final one in that series.”

The menu pinned to the refrigerator as he worked read like that of a Michelin-star restaurant. Courses include gamberi al Don Patrizio (prawns dusted in herbs and flour and sauteed in butter and olive oil), pasta al forno (a baked pasta dish), costolette di manzo brasate (braised beef ribs in a special tomato sauce) and Father Michaels’ own recipe for finocchio al forno (fennel baked with bread crumbs, parmesan and spices).

When asked if it was difficult to put together such a menu, he smiled. “I think food,” he said.

Father Michaels said he started cooking when he left the seminary.

“There were certain dishes that if I didn’t make myself, I couldn’t have them,” he said. Namely, his mother’s Sicilian spaghetti sauce, simmered for eight hours to intensify the tomato and meld the clove, allspice, salt and pepper that characterize it.

Such is the case with his mother’s stuffed artichoke, a rare and highly anticipated treat she served as dessert to her children.

“Artichokes were hard to come by where I grew up,” he said. “This was a way Mom got us to eat our dinner.”

When it comes to his own daily meals, a Costco salmon fillet prepared on the weekend can last Father Michaels all week.

“I’m not going to spend a lot of time cooking for myself,” he said. “But if it’s for other people, well, that’s part of the fun.”

Meals can be purely functional given the schedules people have to keep, but he believes that “mealtime is still a time to be shared.”

It can be transformative for couples, families, friends and communities, said Father Michaels.

“It renews their connection to each other and unites them,” he said.

Father Michaels sees a natural parallel between cooking and being a pastor.

“They are both about service,” he said. “If you are going to cook something and you want people to enjoy it, you have to care about them first. It has to be intentional.”

“Cooking with the Saints”

Authors Alexandra Greeley and Fernando Flores present saint biographies and dishes tied to the liturgical feasts of the church.

Catherine Sample Fowler, producer of the film, “The Dating Project,” offers 40 recipes in a cookbook geared to young adult Catholics.