In praise of silence and solitude 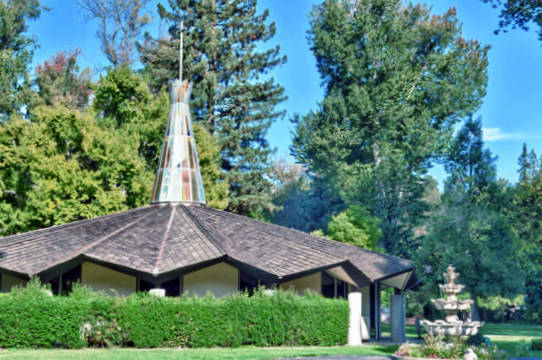 What is a retreat?

The dictionary defines the verb as “the act of going backward or of withdrawing.” The noun of retreat is “a quiet, private or secure place.” A retreat center, like Vallombrosa, is that quiet spot to which one can withdraw. When I am talking to people about our retreat center, I emphasize the quiet that characterizes our life at Vallombrosa; it is essential to everything we do.

I’m growing deaf, so I’m very grateful to those willing to stand on my “good side” or be patient when I ask them to repeat things. As a result, some will conclude that growing deaf is no more than a process by which sounds are diminished. But another aspect of hearing loss is far more annoying, and that’s the confusion of sounds that occurs whenever there’s a crowd and several individuals are talking at once.

I mention this because almost any time we open the Bible, unless we encounter Jesus off by Himself praying, we encounter an absolute cacophony. Jesus is almost always surrounded by a crowd. His disciples ask how He can possibly ask who touched Him because there are so many people around Him, and when He goes to heal Jairus’ daughter, the first thing He does is throw out all the noise makers.

When God punished our prehistoric ancestors for their pride, the Book of Genesis tells us He confused their speech. Three or four thousand years later, when the poet Dryden wished to characterize our later ancestors in the Old Testament, he used an uncomplimentary adjective for noise to describe their decadence: “God’s murmurous people.” In both cases, a Babel of noises, competing for attention and demanding to be heard. And offering a good reason to seek a retreat.

If I look for an image of what we strive to offer at Vallombrosa, I ask folks to think about any picture they’ve ever seen of the Annunciation. Here we encounter no crowds, no raised voices, no noise at all, really. Just two individuals, facing one another and carrying on a conversation that will change the course of history. Back in the 16th century, John Donne summed up this encounter pretty eloquently, and I love to refer to his poem when someone asks what a retreat is all about: “Salvation to all that will is nigh … (and) faithful Virgin, yields himself to lie… cloistered in thy dear womb.”

That word “cloistered” conjures up what a retreat is all about – or what it ought to be about – a calm and tidy world where nothing goes to waste, and every single word and action bears fruit. A world where our lives change because the only voice we hear is God’s, and the only word we say is “yes.”

I’ve mentioned silence quite often in this reflection, and I use it to promote Vallombrosa and its ministry. I was a great fan of John Quinn, deceased former Archbishop of San Francisco, and he once observed, “Silence is not a penance. It is a necessary disposition if we are to receive anything from God.” The 19th-century French Dominican, Henri Lacordaire, said much the same thing, “After the Word, silence is the greatest power in the world.” We live in a world of noises competing for our attention. We might think of Archbishop Quinn’s remark, and Lacordaire’s, the next time we’re alone and tempted to turn on the television simply to have something going on in the background.

The Vallombrosa estate is composed of a dozen or so wooded acres, which allow those making a retreat to draw back from the demands of everyday life and relish the silence they encounter. How individuals spend their time is a matter of choice, and Vallombrosa offers a number of options. One might join a number of similarly minded others and place themselves under the leadership of a conference director, who offers two or three daily talks, followed by time for private prayer and reflection.

On the other hand, should individuals wish, they may join a silent retreat group and seek personal guidance from the retreat director,  “checking in” regularly to report their progress on the spiritual path they have chosen to embrace.

If a person wishes no more than to spend time alone, Vallombrosa offers ample opportunities for such private retreats, providing sacramental reconciliation and spiritual direction should the individual desire.

Folks often ask how long a retreat should last. This is negotiable, but we recommend five days, if only because some of the spiritual giants in our faith suggest that a lesser number is “not enough to change a soul.” Nevertheless, however long one plans to devote to a retreat, silence is altogether key to the experience. Thus, we ask those who make retreats at Vallombrosa to abandon cellphone and computer use during their time with us.

The Blessed Virgin has been honored with the title “Mother of the Church.” We might also call her the mother of retreats, for she sets the example for all we strive to accomplish when we make a retreat. The poet Rainer Maria Rilke described Mary’s encounter with Gabriel at the Annunciation, and said, “It did not scare her that he entered/But that he was so utterly present…/That his gaze and hers, looking up to him collided/ As if everything outside had become empty….” We are very proud of our shrine dedicated to Our Lady of Lourdes, an area we have taken great trouble to develop as a spot for our visitors’ quiet meditation.

To anyone who wonders: why make a retreat? I reply: come to Vallombrosa. A retreat allows us to create a cloister in our hearts where God’s gaze and ours can collide. Mary’s encounter resulted in the Incarnation. Our encounter may be less dramatic, but no less fruitful. I recently read a book titled “Quiet: The Power of Introverts in a World That Can’t Stop Talking.” The author observes that solitude contributes a great deal to creativity. A retreat isn’t a vacation; it’s an opportunity to restore and refresh who we are.

–Father Reginald Martin, OP, is the director of Vallombrosa Center.

Abbey of Our Lady of New Clairvaux (Trappists)

Carmel of Jesus, Mary and Joseph

Carmelite Sisters of the Most Sacred Heart Retreat Center