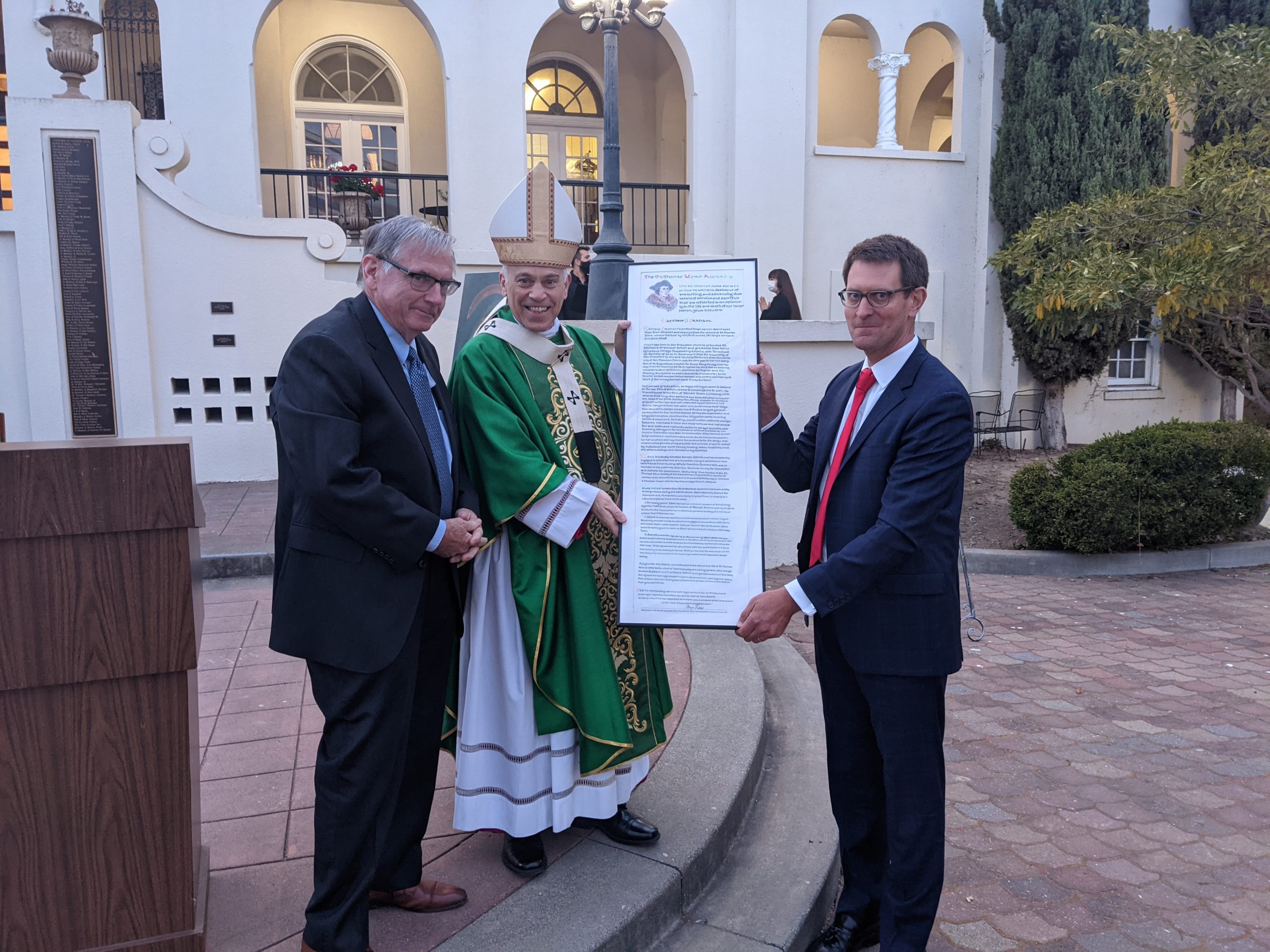 The St. Thomas More Society honored San Francisco attorney Matthew F. Graham with its signature St. Thomas More Award, presented to someone who exemplifies the organization’s goal of practicing service and sacrifice in the pursuit of justice.

Founded in 1937, the St. Thomas More Society of San Francisco is the oldest association of Catholic lawyers and judges in the West. According to the St. Thomas More Society, they “attempt to achieve what their 16th century namesake ultimately could not: full concord between the practice of faith and the practice of law in the secular commonwealth.”

Father Mark Doherty, president and rector of St. Patrick’s Seminary & University, gave the homily. An annual event, the Mass seeks blessing and guidance for judges, attorneys, law school professors, law students, government officials and others involved in the legal and justice systems. The Red Mass is usually held at the opening of a new judicial term.

Born in San Francisco, Graham attended St. Michael’s grammar school and graduated from St. Ignatius College Preparatory in 1973. He received his bachelor’s degree from the University of San Francisco in 1977 and graduated from the University of San Francisco School of Law in 1980. Over his almost four decades of distinguished legal work at Aiken, Kramer & Cummings, Inc. and Wendel Rosen LLP, Graham is seen as a leader in the field of construction law and well-respected by jurists and his fellow lawyers, according to the society.

But what stood out even more was his devotion to his Catholic faith and life of service, said the society’s president.

Bryan L.P. Saalfeld, president of the St. Thomas More Society of San Francisco, presented the award to Graham and noted that, “Even more notable than his professional success is his innate ability in being a decent, caring, and selfless person…Matt’s commitment to the values and life of St. Thomas More is reflected in what he does every day as a caring person, fine lawyer, devoted husband, loving father, and true friend.”

Saalfeld highlighted Graham’s work in serving as a board member of Rebuilding Together Oakland, where he led Wendel Rosen’s yearly projects to rebuild the homes of senior and disabled people, and also his constant outreach to the homeless. Graham not only provides money and food to the homeless, but also engages in conversations and treats them with respect, Saalfeld said.

“Just a few months ago, early one morning Matt discovered a distraught elderly homeless woman in the office parking lot who lived in her car and was unable to drive away due to a dead battery,” said Saalfeld. “Instead of looking the other way, Matt approached her, conversed with her, and insisted on buying and installing a new battery in her car. Without his help, the woman’s car would have likely been towed and her home destroyed, which would have been devastating.”

Justice Martin J. Jenkins, associate justice of the California Supreme Court, echoed Saalfeld’s praise in a speech he gave during the reception in honor of his lifelong friend. Justice Jenkins and Graham attended the now closed St. Michael Catholic School together and although life took them in separate but similar directions after grammar school, the two remained close friends. The justice thanked Graham for his service and for his example of always going a step further to help those in need.