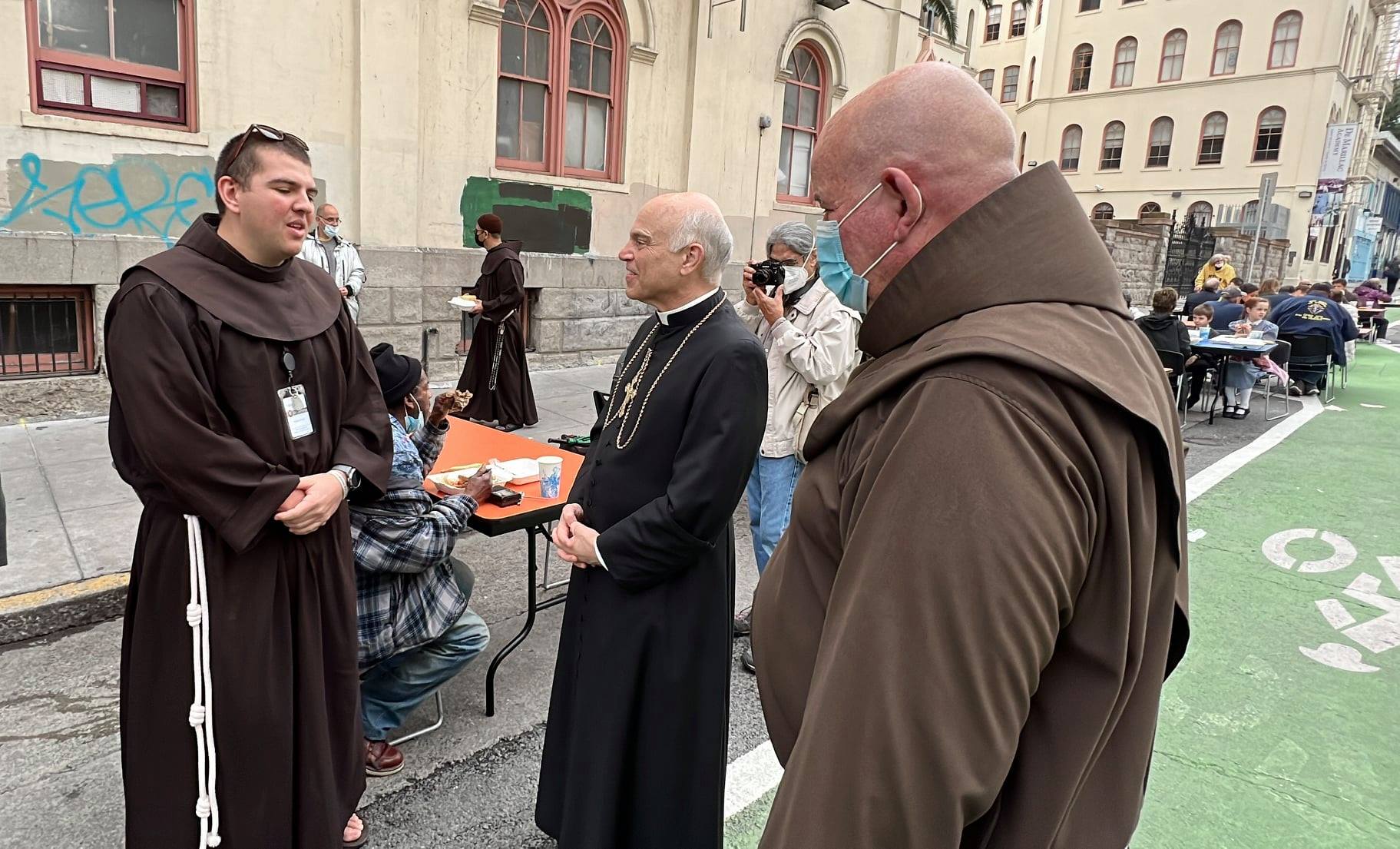 Requiem for the Homeless: “Beauty is called for”

Archbishop Salvatore J. Cordileone brought San Francisco’s faith, civic and social service communities together at St. Mary’s Cathedral to pray for the souls of the homeless dead in a Requiem Mass for the Homeless Nov. 6.

The archbishop commissioned the Mass featuring the sacred music of Frank La Rocca, composer-in-residence of the Benedict XVI Institute for Sacred Music and Divine Worship. The music was voiced by the Institute’s own choir led by conductor Richard Sparks. St. Mary’s director of music Christoph Tietze accompanied the choir on the cathedral’s Ruffatti organ with a moving backdrop of violas, cellos, double bass, and harp.

The Mass, the archbishop said, was an “act of mercy and devotion.”

The grandeur of the cathedral, together with the written-for-the-occasion music was, he said, an appropriate way to “accompany our beloved deceased homeless on their way to heaven.”

“Beauty is called for, for beauty has the power to heal, unite and manifest the presence of God,” he said, and dignifies the human condition. “Those that are suffering the consequence of homelessness, poverty and marginalization deserve nothing less.”

A printed keepsake of the work was offered to the several hundred people in attendance at the Mass. On the back was a “Litany to the Patron Saints of the Homeless”, written by Benedict XVI Institute poet-in-residence, James Matthew Wilson.

Father Gaa, provincial minister of the Franciscan Friars of the Santa Barbara Province, oversees Franciscan ministry at St. Boniface Parish in the city’s Tenderloin neighborhood, and at the St. Anthony Foundation that serves it.

In his homily, the archbishop described St. Francis of Assisi’s conversion of heart. Having grown up in wealth, Francis was “especially repulsed” by lepers until the day he encountered a man suffering a particularly acute case. He was moved to dismount his horse to offer him alms. When the man stretched out his hand to receive it, St. Francis kissed it.

“Francis discovered that the object of his fear was not a monster, but a man,” the archbishop said, and the saint spent the rest of his life in service to the poor and marginalized.

St. Francis was not an activist in the modern way, the archbishop said. He didn’t rail at the social conventions that separated lepers from non-lepers. Instead, he recognized their humanity.

“He embraced them, kissed them, looked them in the eye,” he said, and acknowledgement that they were first and foremost “children of God.”

The archbishop referenced the often-quoted Gospel passage, Matthew 25:31-46, where Jesus talks to his followers about their judgement before God, saying in verse 40: “Truly I tell you, whatever you did for one of the least of these brothers and sisters of mine, you did for me.”

Archbishop Cordileone distinguished between giving to get something in return, and giving out of love.

“Give to give,” he said. “This is where we find our Lord hiding. Hiding in the humanity of those who are suffering, who others find repulsive.”

Jesus has a proclivity for “hiding” behind the appearance of something “simple and humble,” the archbishop said.

“He does that on the street, and he also does that from the altar, hiding behind a simple piece of bread and a humble cup of wine,” he said.

He compared the homeless to all of humanity in speaking of the meaning of the word “tabernacle,” defined literally as a tent, or a temporary shelter.

“The tent is something that has made itself very familiar to us recently even to us city dwellers,” he said. As a “makeshift dwelling, that signals impermanence and instability” it’s a reminder to us “how transitory life in this world is.”

The souls of those who die without a permanent home provide us a powerful reminder that we are a “people on pilgrimage,” said the archbishop.  “This not our true home. We are moving toward our final destiny our permanent home which lies beyond this home.”

The archbishop followed the Mass with a visit to St. Anthony’s Dining Room in the Tenderloin.