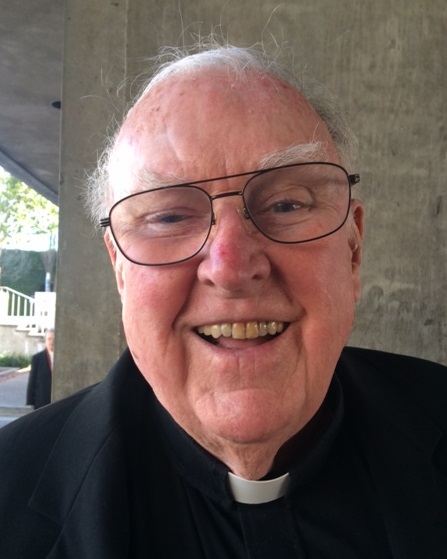 Rev. J. Thomas Madden, son of the late John and Katherine Madden, was born July 8, 1927 in San Francisco, CA. His sister, Catherine, predeceased him in death.

He received his elementary school education a St. Monica’s School in San Francisco and entered St. Ignatius High School where he graduated in 1945. He then, began his studies for the priesthood at Saint Joseph College, and graduated from St. Patrick’s Seminary and University in Menlo Park, CA.

Father Madden was ordained in 1953 and was a priest for 69 years. In February 1953, Father Madden’s first appointment was as Parochial Vicar of St. Stephen Parish in San Francisco. He then served on the Faculty at Serra High School until 1970 when he enrolled in Notre Dame University where he received his Ph.D. in Counseling Psychology. He served his Chaplain internship at the Palo Alto VA Hospital.

In 1972, he was appointed to the Faculty at Saint Patrick’s Seminary and University in Menlo Park and in 1977 became the Director of Education for the San Francisco Archdiocesan Priests. At this time, he organized the Ministry to Priests Program. He was of service to priests both formally and informally, locally and in other dioceses, providing counsel and giving workshops.

Father Madden was appointed Director of Vallombrosa Retreat Center in 1982 and served there until his retirement in 2003.

Father Madden was a man without pretense. He enjoyed life, read regularly and widely, and formed many long-lasting friendships. He will be missed by his dear friends, Bishop John Cummins, Msgr. J. Warren Holleran, Arrin and Susan Skelly, the Ward and Hurley families and many others.

This past year and a half, as his health deteriorated, Father Madden had the care and assistance of Father Steven Brown. Father Madden missed no opportunity to express his deep appreciation for that care.

Mass of Christian Burial will be celebrated on Tuesday, Feb. 22, 2022 at 10:30am at the Chapel at Vallombrosa Retreat Center, 250 Elk Grove Ave., Menlo Park, CA 94025. Committal Holy Cross Catholic Cemetery. Donations in his memory may be made to: The Priest Retirement Fund, Archdiocese of San Francisco. 1 Peter Yorke Way, San Francisco, CA 94109.