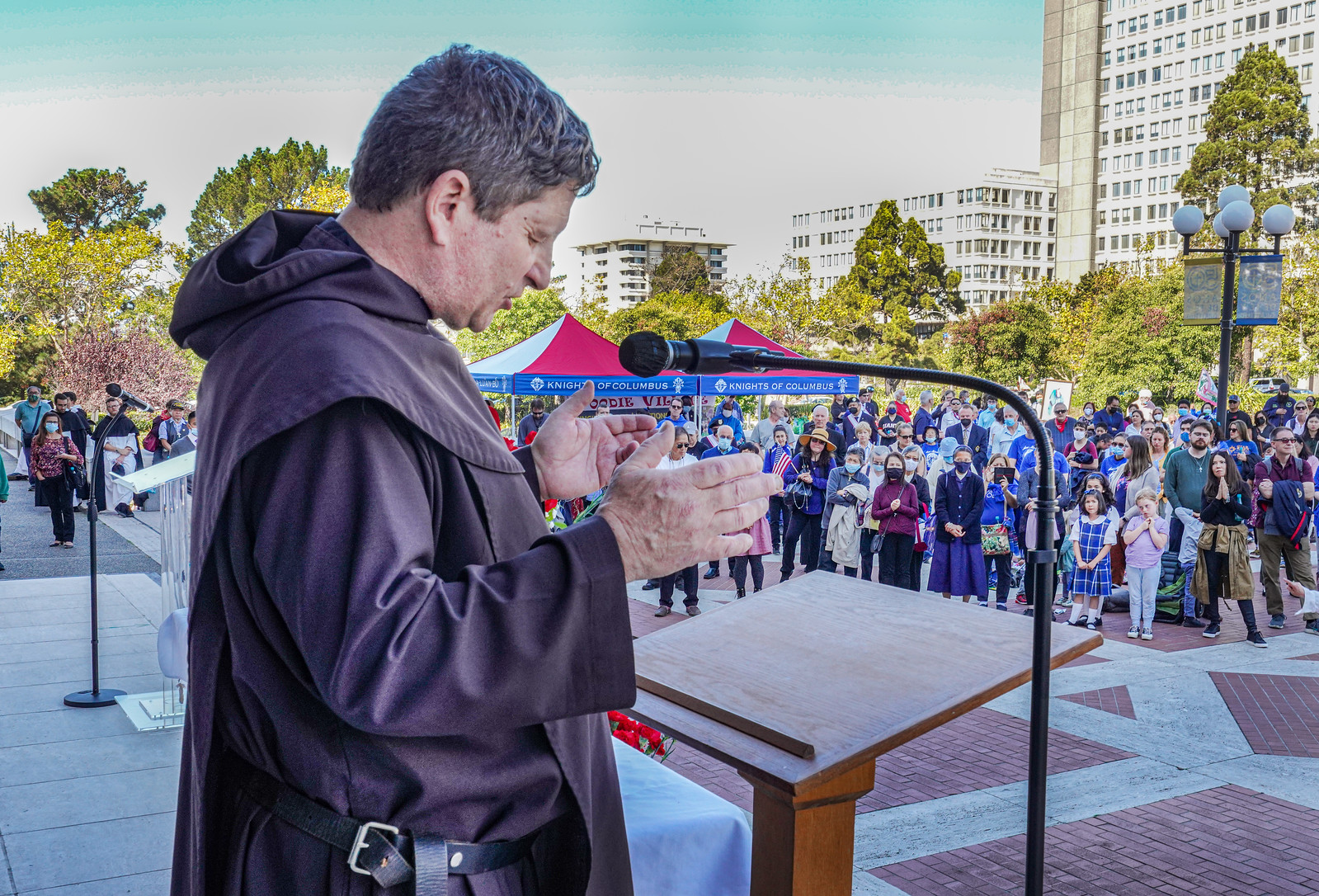 The 10th Annual San Francisco Rosary Rally was held on Saturday, Oct. 2, a week shy of the 60th anniversary of Father Patrick Peyton’s Rosary Crusade in Golden Gate Park. Gathered at St. Mary’s Cathedral, faithful of the archdiocese prayed the Rosary, the Divine Mercy Chaplet, and listened to a keynote address from Discalced Carmelite Father Christopher LaRocca. Following the rally, Archbishop Salvatore J. Cordileone celebrated Mass and blessed Miraculous Medals that were handed out to attendees of all ages by the Missionaries of Charity.

The youth of the archdiocese took the lead saying the rosary. Decades of the rosary were led by students from Archbishop Riordan High School, Sacred Heart Cathedral Preparatory Marin Catholic High School, and Stella Maris Academy. Dominican Father James Moore led the fifth mystery of the rosary in Spanish.

In his keynote address, Father LaRocca spoke on the Miraculous Medal and the symbolism of the medal spanning salvation history from Genesis to Revelation.

The story behind the Miraculous Medal is one full of miracles. In November of 1830 in Paris, Our Lady appeared to St. Catherine Labouré, a member of the Daughters of Charity of Saint Vincent de Paul. The Blessed Mother appeared to her standing on a globe with dazzling rays of light streaming from her outstretched hands. She asked St. Catherine to create a medal with the image and the words, “O Mary, conceived without sin, pray for us who have recourse to thee.” She promised special protection to those who wear it and say the prayer. It came to be known as the “Miraculous Medal” because of all the miracles associated with it.

Saints throughout history had a devotion to the medal, such as St. Maximilian Kolbe and St. Mother Teresa. Fr. LaRocca spoke on St. Mother Teresa’s love of the Miraculous Medal saying, “…how many medals did I receive from Mother Teresa? Many. She would kiss them and put them in my hand…all over the world. In Africa, deep bush Uganda, ragged little barefoot babies…with the miraculous medal around their neck. So we thank Mother.”

In his homily, Archbishop Cordileone spoke on how to live the Consecration to Mary in daily life. He encouraged those present to say the rosary every day, to say the rosary as a family once a week, to attend Eucharistic Adoration once a week and fast and do penance on Fridays.

“Let us persevere in living our archdiocese consecration to the Immaculate Heart of Mary,” Archbishop Cordileone sad, “so that our hearts might be open and receptive to God’s abundant grace. We thereby might serve as the channels of His Spirit to renew the face of the Earth here in our archdiocese.”

Dominican Sister Carol Joseph traveled to the rally with students from Marin Catholic. She commented, “I thought it was beautiful that we all received the Miraculous Medal today. I love the Miraculous Medal….The Lord can use that and Our Lady’s blessing on the people that wear it to really convert hearts.”

rosary rally
All Posts
Previous
|
Next