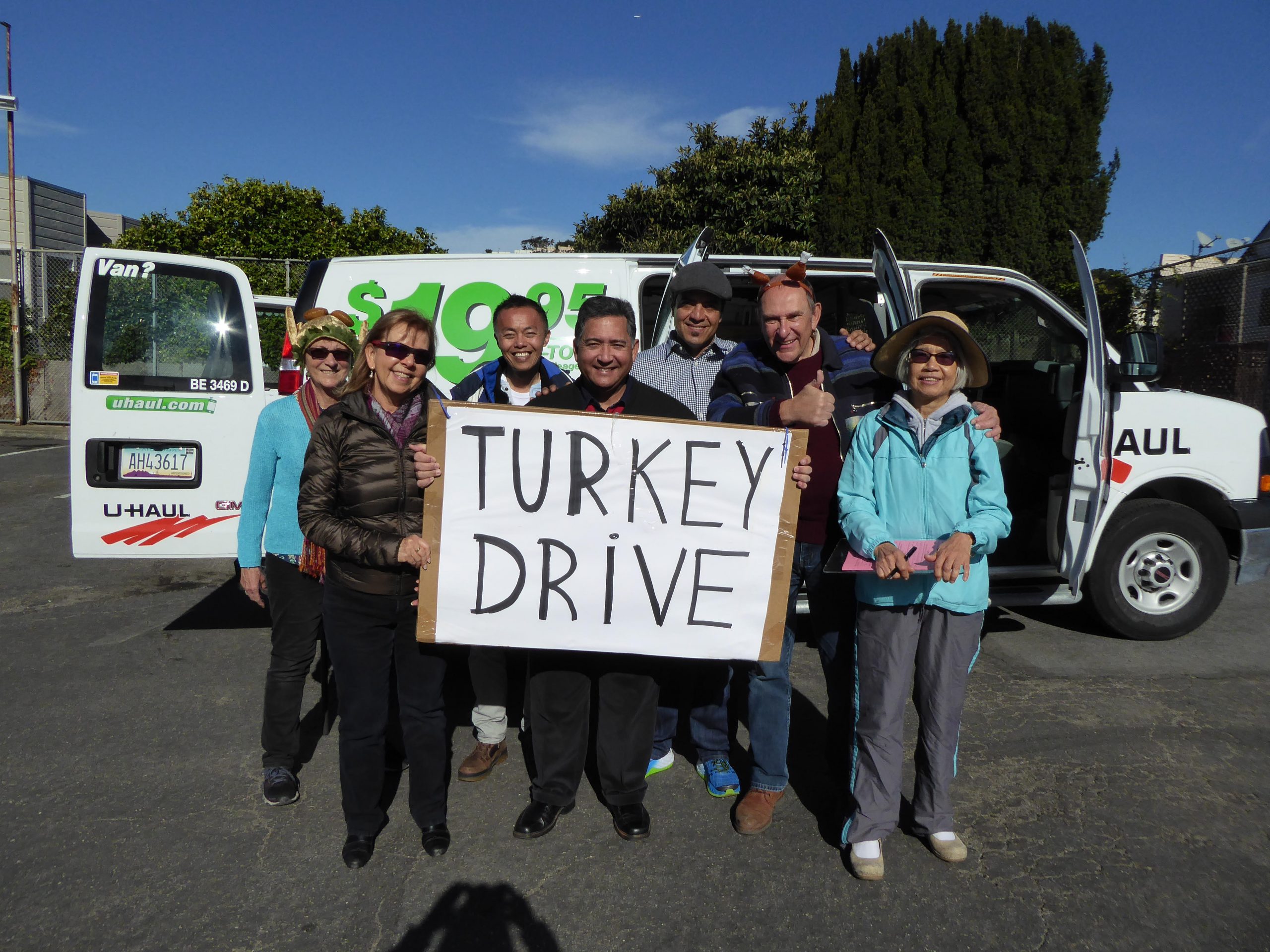 St. Emydius parishioner Pierre Smit, founder of the sfturkeydrive.com (with thumbs-up) is pictured in 2017 with volunteers of the annual turkey drive benefitting St. Anthony’s Dining Room (Courtesy of Pierre Smit)

Pierre Smit is unofficially San Francisco’s “Turkey Guy” After almost a decade of collecting frozen turkeys from neighbors to donate to St. Anthony’s Dining Room — almost 5,000 turkeys to date — he deserves the title.

“If you put ‘turkey drive’ and ‘San Francisco’ into a search engine, our listing pops up,” said Smit, a longtime St. Emydius parishioner. The website is sfturkeydrive.com.

He started the grassroots drive in 2012 from his own home in Merced Heights as a simple project to help feed the hungry in San Francisco. He printed up a flyer asking neighbors to donate turkeys that he would bring to St. Anthony’s Dining Room for their annual Christmas dinner. To his surprise, he received 19 turkeys the first year.

The following year he approached Father Bill Brady and asked if the parish would like to join him in the drive. The pastor agreed.

“I told him I would do everything,” said Smit, a native of Belgium, with a smile. He told him it wouldn’t cost the parish a penny. “All you have to do is make the announcement at church.”

Indeed, the few associated costs are born by Smit himself, from creating, printing and mailing the annual flyers announcing the drive, to renting the truck used to collect and transport turkeys to St. Anthony’s Dining Room.

His mailing list has grown to 8,400 over the years, with donors far away as New York and Chicago sending in checks or making a donation online. Smit uses the church address as a collection point for checks and cash. “Virtual” turkey donations at sfturkeydrive.com are redirected to the St. Anthony Foundation website. All monetary donations are “converted into turkeys” by Smit.

More than a dozen neighbors and/or parishioners volunteer on turkey delivery day, as do supporters from as far away as San Mateo, Marin and Alameda Counties. The drive now also accepts hams, for Christmas. Vegetarians and others can donate bags of fresh vegetables instead, such as onions and potatoes.

The turkey drive is not a St. Emydius event or ministry, but a neighborhood event run out of the parish. The collaboration has been a “very positive thing” for both, according to Smit.

He said he and his volunteers have seen cars pull in wishing to unload 10, 20, even 25 turkeys from their cars.

Interestingly, the drive in 2020, which was a virtual one for the first time ever because of the COVID-19 pandemic, was the most successful of all.

“Last year we missed the excitement of our drop-off site,” said Smit. “However, we collected 50 percent more donations than the previous year.”

The sfturkeydrive.com community enjoyed two separate, music-filled Zoom celebrations to mark the achievement and compensate for the lack of in-personal comradery: In 2020, 1,109 virtual turkeys were donated compared to 740 total turkeys in 2019).

The drive has been so successful that it is now the single supplier of turkeys and hams to St. Anthony’s Dining Room for Thanksgiving and Christmas, he said.