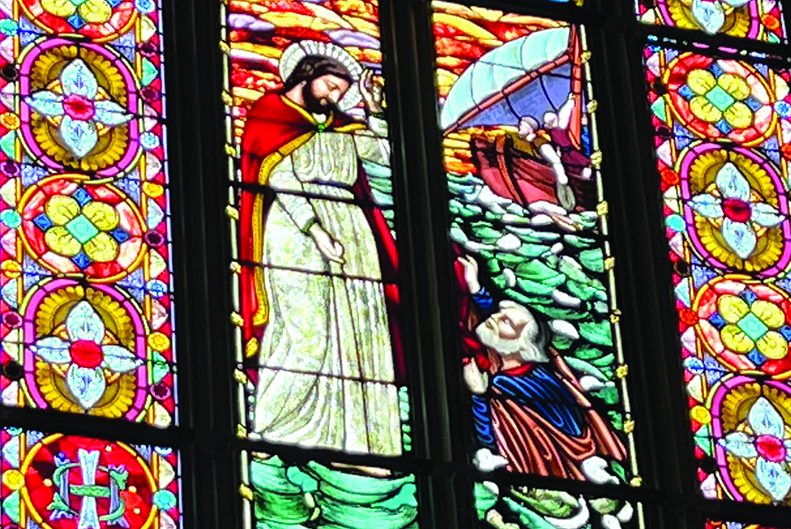 Jesus sent his disciples before him across the Sea of Galilee. That evening, the boat carrying the apostles was tossed about by wind and waves. Just before dawn, Jesus appeared to them, walking on water and told them, “Take courage, it is I; do not be afraid.” Peter asked Christ command that he come to him on the water. Jesus replied, “Come.” Peter began to walk on the water toward Jesus. “But when he saw how (strong) the wind was he became frightened and, beginning to sink, he cried out, ‘Lord, save me!’ Immediately Jesus stretched out his hand and caught him, and said to him, ‘O you of little faith, why did you doubt?’” (Mt 14: 22-33).

This famous biblical scene is depicted in the stained-glass window behind the altar of St. Peter Church with the inscription, “Lord save us, or we perish.” According to retired Auxiliary Bishop William Justice, who served as pastor of St. Peter for six years, the window is a reminder to the generations of parishioners, mostly immigrants from Ireland, Italy and Central and South America, to have courage in the midst of life’s many storms — especially when starting a new life in a new country.

St. Peter’s was founded in 1867 in the Mission District of San Francisco. Its pastors, such as Father Peter Yorke, led the way in standing for the rights of workers, laborers and immigrants; truly bearing the image of Christ catching Peter and reassuring him of his dignity and worth.

The church itself is a work of art, and for its time the designs were new. Artists Attilio Moretti and Bernardo Trezzini, famous San Francisco designers, hand painted the interior of the church.

The stained-glass window of Jesus saving St. Peter is just as ornate. An original window to the church structure, the detail in the waves, Jesus’ tunic decorated with subtle flowers and the tracery around the image both in the main window and two side windows reflect the delicate elegance of the painted interior. The tracery on either side of the main window carries symbols and titles of Christ – Alpha and Omega, the Chi Rho symbol of the two letters (X and P) of the Greek word for “Christ” and the IHS symbol for the holy name of Jesus. 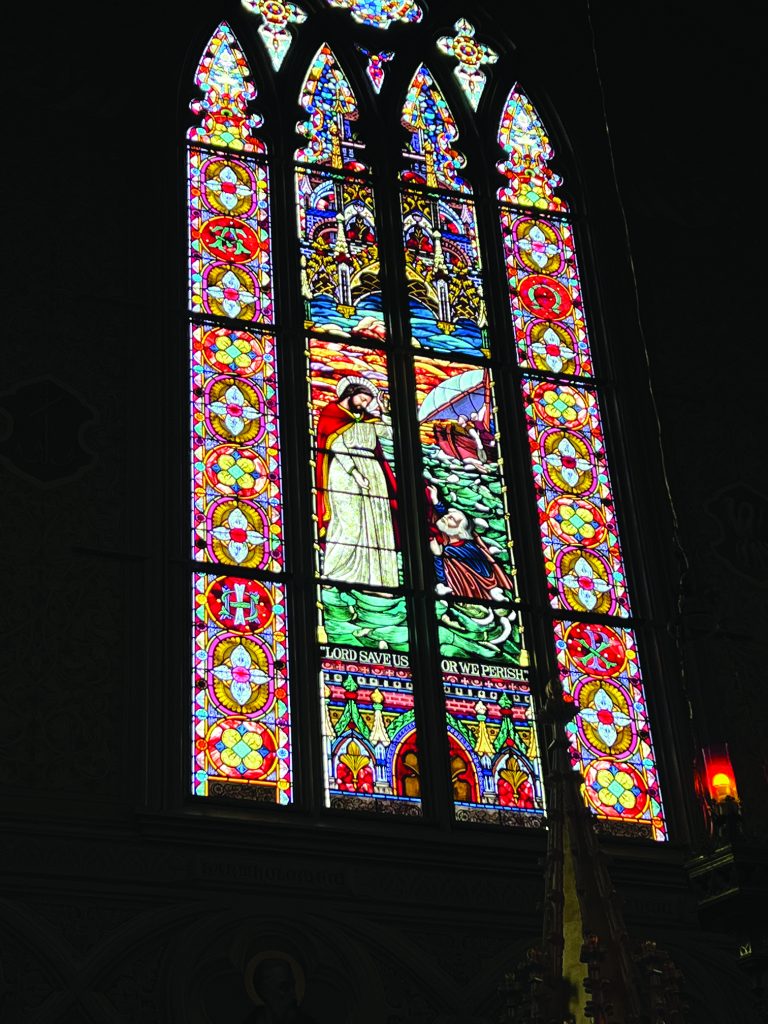 Miraculously, the stained-glass windows of St. Peter’s and the church itself survived the 1906 and 1989 earthquakes; however, the church suffered a bad fire in 1997. A votive candle in the Sacred Heart shrine flared up and damaged the roof, walls and ultimately the windows. Windows were broken on the sides of the church in order to vent the building. Others were blown out by the fire. The only surviving windows were the three behind the altar.

Ron Bovard, founder of Bovard Stained Glass Studio, was asked to replicate the lost windows and help restore the window on the main altar. Of St. Peter’s 46 stained-glass windows, Bovard Studio replicated 38 that were too damaged to be restored. Matching both the stained glass itself and the glass painting, these new windows were stenciled glass, kiln-fired and painted. Bovard Studio also replaced all the mahogany wood frames for the windows on the sides of the church and the windows behind the main altar with Honduras mahogany, re-leaded the surviving windows and set the new windows with a laminated tempered glass exterior glazing. The restoration of the church was completed in 2000.

The image of Jesus saving Peter survives today amid earthquakes, fire and now a pandemic, reminding us to keep our eyes on Christ and trust in his saving power. ■