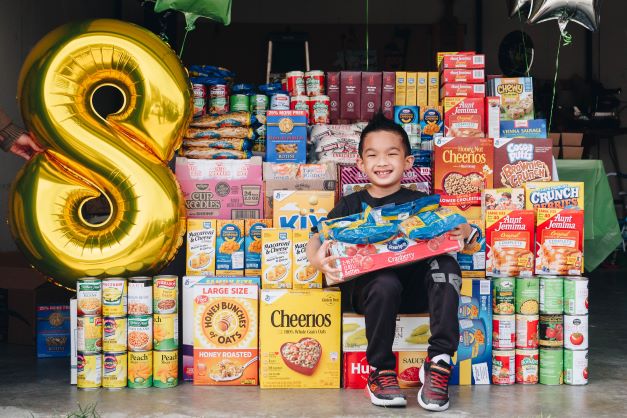 Little Bennett Gong is being called a “mini-Vinnie” for turning the occasion of his 8th birthday into a successful St. Vincent de Paul food drive and fundraiser for the homeless and poor.

The third-grader at Skyline Elementary School in Daly City was awarded the Nicholas J. Peters Ozanam Spirit Award for youth and young adults in September 2021 for his compassionate response after encountering a homeless person not long before his July 18 birthday.

The St. Vincent de Paul Society of San Mateo County instituted the award in 2019 to annually recognize a young Vincentian making an outstanding contribution towards service of the poor and needy.

“I saw a homeless person one day and I asked my mom why does this man live on a bike and how can we help,” Gong explained on a YouTube video of the online awards brunch last fall.

The youngster told his parents he did not want any gifts for himself, wrote Madeleine Livacoli, president of the St. Andrew Parish SVdP Conference in a nomination letter for the annual award.

“He was very concerned and asked his mother about the man’s wellbeing, and how they could help him,” said Livacoli.

The budding Vincentian was serious about his birthday request, said Livacoli, and his family and friends fulfilled it. His goal was to fill eight bags of food for his 8th birthday, but he “far exceeded that goal.” With his family in tow, Gong arrived with a fully-packed van packed with almost a dozen bags of food for the conference. Bennett also donated the money he received for his birthday — about $1,000 — and it was used to purchase additional food.

“At a young age, Bennett exemplifies the mission of Vincentians in his concern for and service to our neighbors in need,” Livacoli said.  “We, along with his family, are pleased and proud that he is the recipient of this award.”

Fe Hortinela, a member of the St. Andrew Parish Stewardship Council, said the conference “was very impressed” by Gong’s generosity to the St. Andrew SVdP pantry. “His gifts were so abundant that it filled our pantry shelves with bags and bags of food for our Thanksgiving and Christmas distribution to underserved St. Andrew families,” she said.

Gong’s mother, Jennifer said that her son was born selfless and thoughtful.

She said that when he was only 5 years old, he received a stuffed animal while touring an ambulance. His excitement was not for a new toy for himself, but for his sister.  “He’s typically the last one out of an elevator because he is holding it open for everyone else,” she said. “I am humbled and inspired by the reach of his thoughtfulness.”

Gong has inspired his baby sister to following in the path of Nicholas J. Peters and Blessed Frederic Ozanam. She’s planning a similar drive for her 6th birthday.

In an unscripted message at the end the YouTube video, Gong thanked those who donated to his birthday fundraiser for “making other people’s lives a lot more better.”

“I felt happy because all those families can actually have that food,” he said. “God bless you, thank you for the award and stay happy.”