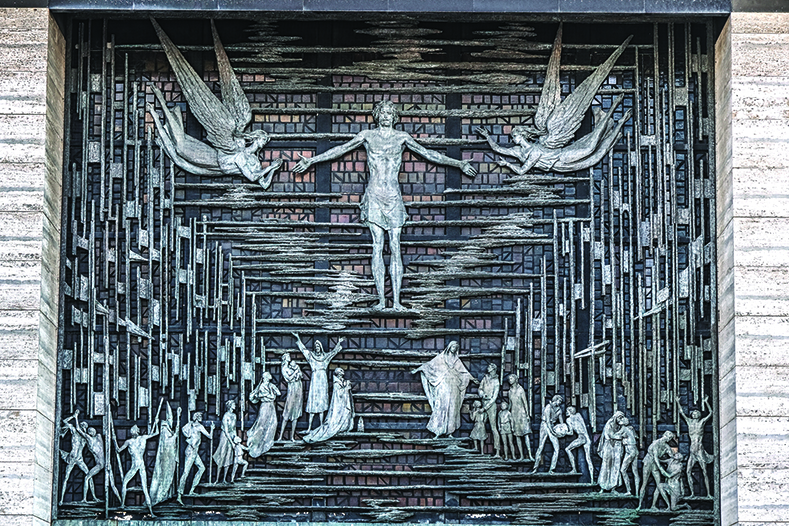 Cathedral architect Pietro Belluschi visualized his San Francisco project as an all-encompassing work of faith, integrating the fine arts and architectural elements to achieve a unifying and uplifting structure of contemporary splendor. Architectural Digest magazine recognized this in 2017 by naming the Cathedral of St. Mary of the Assumption one of the 10 most beautiful churches in America.

Covering two city blocks at the top of a windswept hill not far from San Francisco’s urban center, St. Mary’s Cathedral is a distinctive city landmark with a substantial physical and historical footprint. It is four times the size of the cathedral it replaced. The massive structure was designed to seat 2,400 › people, with standing room for 1,500 more. The reinforced concrete cathedral rising 191 feet above the interior floor is supported by four pylons that extend 75-85 feet into bedrock, each designed and engineered to withstand 10 million pounds of pressure. A gilded aluminum cross rises an additional 54 feet above the unique cupola for a total height of 244 feet.

The seventh archbishop of San Francisco, Cardinal William Levada, described the cathedral’s striking yet controversial form as evocative of the meeting tent that housed the Ark of the Covenant during Israel’s 40-year desert journey from slavery into freedom.

“The tent was a reminder for the people of Israel, as well as a sign to the nations that God had definitely ‘pitched his tent’ with his people, traveling with them on their pilgrim journey,” Cardinal Levada wrote in the April 22, 2011, Catholic San Francisco edition commemorating the 40th anniversary of the cathedral.

There is no substitute for a visit to St. Mary’s Cathedral, or better yet, a Eucharistic celebration there. This tour highlighting its most significant features is an invitation to experience for yourself this cathedral like no other.

Doors and over panel

Entering a church is a practical experience with a built-in allegory for the Christian journey. The main entrance to St. Mary’s reflects that. Italian artist Enrico Manfrini of Milan designed the cathedral’s bronze doors and the distinctive panel above them. The detailed panel depicts the triumph of Christ through the ages, his extended arms welcoming all into the kingdom of heaven. Ascending a hill to his left are warriors, travelers, laborers and mothers with young children. Seen are St. Francis of Assisi, the patron saint of San Francisco; St. Clare, the patroness of Santa Clara Valley (once a part of the Archdiocese of San Francisco); and Pope St. Paul VI, the pope at the time of the cathedral’s construction. On the right, people from many nations come to God through works of charity; a family representing the church family is presented to Christ by Mary. Manfrini’s tanglewood church doors signal the obstacles encountered in our journey toward God; gargoyles and dragons on the handles represent the earthly reality of evil and death.

Located directly inside the entryway, the baptismal font reminds visitors that it is through baptism we enter the community of the church. Three descending steps reach a font with a gem-cut appearance, surrounded by marble railings. The paschal candle is here, where it is lit at the Easter Vigil as a reminder to the newly baptized to be “lights of the world.”

Hungarian artist GyÖrgy Kepes’ stunning glass window is a blazing point of focus as one leaves the cathedral. Archbishop Salvatore J. Cordileone called the window “a reminder to worshippers of who they are called to be” in his homily celebrating the cathedral’s 50-year anniversary on the Aug. 15, 2021, feast of the Assumption.

“The panel above the front doors, now seen from the inside, reveals something unexpected: the side figures are no longer men and women climbing a hill, as is seen on the outside of the cathedral,” he said. “Instead, with light streaming through the glass, one now clearly sees a golden chalice, the embodiment of the Eucharist, and in the cup of the chalice, there appears the ascended Christ, returning to his Father in glory.”

Kepes also designed the cathedral’s multicolored glass windows: four brilliant lines of color that stretch 39 feet up to meet in a prismatic cross at the apex of the cathedral. Ancient Greeks believed that four elements — earth, air, water and fire — composed all of creation. Kepes used green in varying shades to represent earth, red for fire, blue for water and yellow for air in the faceted windows. As the sun moves from east to west over the course of a day, the colored glass casts continually changing light down into the cathedral.

Arguably the most defining visual element of the cathedral, the baldacchino is a 150-foot-high suspended sculpture by American artist Richard Lippold. Traditionally, a baldacchino is a canopy placed over an altar as a protective feature for Mass celebrated outdoors. Here, it is an architectural element accenting the sacredness of the altar that draws one’s eyes up toward heaven. Over 4,000 aluminum rods in 14 tiers are attached to gilded wires forming an ethereal shower of shimmering light. That light appears ascending or descending, depending on the angle from which it is viewed. A simple cross is suspended from the sculpture over the altar.

Former cathedral rector Msgr. John Talesfore said this about Lippold’s baldacchino: “I’ve never found anything that competes with it in terms of the awe it evokes and the multiplicity of intepretations among the faithful and tourists.”

The simplicity of the sanctuary underscores the focal point of the cathedral: the altar, around which the celebrant and the congregation gather to celebrate the Eucharist. The altar, ambo and bishop’s chair are all of the same white Botticino marble, as are the floor and steps. The use of identical materials is a statement that they function together for one purpose: the worship of one God and the salvation of his people. Incidentally, the baptismal font at the front of the church is also carved from the same marble for the same reason.

The altar is carved from a single piece of marble weighing 10 tons. Within the altar are relics from eight saints: St. Patrick, St. Francis of Assisi, St. Peter Chanel, St. Maria Goretti, St. Pius X, St. John Bosco, St. Francis Xavier and St. Therese of Lisieux. The custom of placing relics within a church altar comes from the ancient tradition of building churches over the graves of martyrs.

The bishop’s chair, “cathedra” in Latin from which the word “cathedral” is derived, was designed by local artist Joseph Aspell and installed for Pope St. John Paul II’s visit in 1987. Above the chair are the coat of arms of Archbishop Cordileone, also by Aspell.

The magnificent organ, considered one of the finest in the world, was designed specifically for St. Mary’s by Fratelli Ruffatti in Padua, Italy. Dramatically displayed on a soaring pedestal, it has 5,042 pipes, 66 stops and 92 ranks. The electropneumatic console has solid state circuitry and can be moved to other locations in the cathedral. The organ took three years to build and six months to install.

To the east of the sanctuary outside the sacristy is one of the most sacred spaces in the cathedral. Here is where the tabernacle of the Holy Eucharist is kept. A lamp above the tabernacle is always lit, a sign of Christ’s constant presence. A local artist, Peter Traphagen, designed the wood-inlaid bronze doors that bear the words of St. John the Baptist in Latin: “Ecce Agnus Dei,” meaning, “Behold the Lamb of God.” Designer Kathleen Kilgore designed the tapestry covering the tabernacle doors while local weaver Jean Pierre Larochette completed it. The bronze angel candelabras standing guard at either side of the shrine are the work of sculptor Rosario Rugierio, a student of Manfrini.